My first trip to India was quite the food and cultural adventure, thanks to Intrepid. Check out my answers to real reader questions to learn more about it.

Q: How was the plumbing? I heard that there is a shortage of toilets in the country.

A: While I’m sure Intrepid wouldn’t arrange any accommodations where we’d have a problem finding toilets, we were exposed to some plumbing-related issues during the trip. 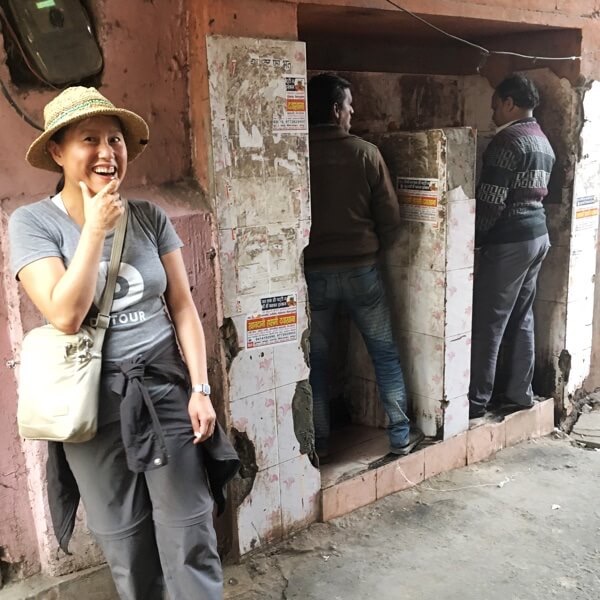 For instance, we saw a commercial on TV discouraging people from pooping in public places, like in fields. But we did see some folks doing just that during some long bus rides through more rural areas. Pancham told us about a government program that subsidizes the building of toilets in people’s homes, which should also reduce the need for pooping in public. But I had the good luck of stepping in a pile. Thankfully, we found some staff at a public restroom with a brush who could scrub it off the bottom of my shoe.

Hot water was also iffy. Only one hotel out of the seven had instant and truly hot water instead of lukewarm water. The first hotel in Delhi even had hot water hours from 19:00 to 22:00 and 05:00 to 10:00, but luckily, you can call the front desk to request that the hot water be turned on. After waiting for about 15 minutes, you can expect some lukewarm water.

And finally, toilet paper rolls at hotels are very small. According to our tour group leader Pancham, it’s because they know guests will take them. 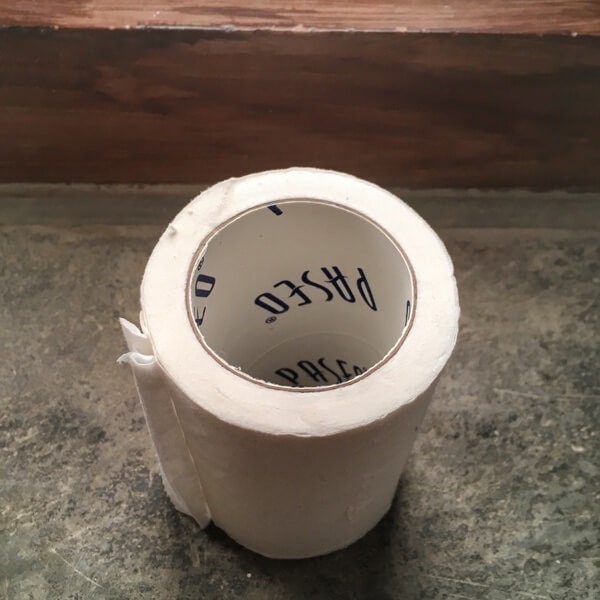 Q: Was the food spicier than it is in the States?

A: This was one of the biggest surprises I encountered during my two weeks in India. Not much food is so spicy as to blow your head off. Pancham explained that there are some dishes that are particularly spicy, but if everything were mouth-numbingly hot, you wouldn’t be able to taste anything. We did request that some dishes be made with green chilies, such as made-to-order masala omelettes when available at hotels for breakfast. 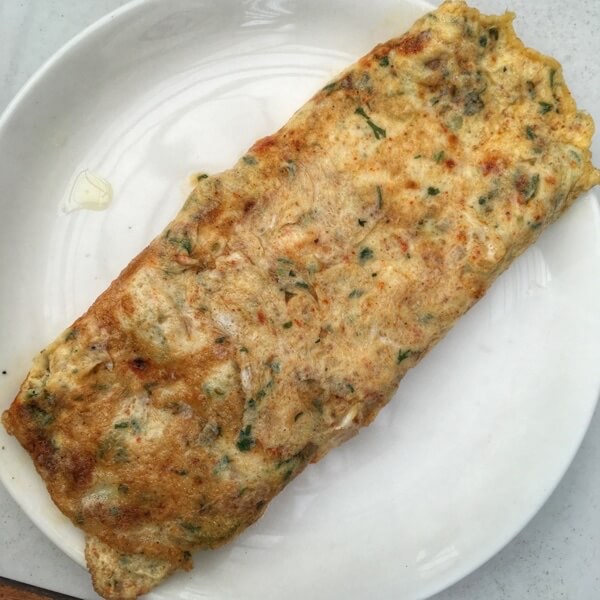 Q: Are there all-you-can-eat buffets like the ones back home?

A: We did partake in buffets at hotels where we stayed, but those don’t offer the same variety of options as the ones I’ve had in the States. Our chaat crawls were a nice indication of how locals can fill their bellies with outstanding street food for not many rupees. 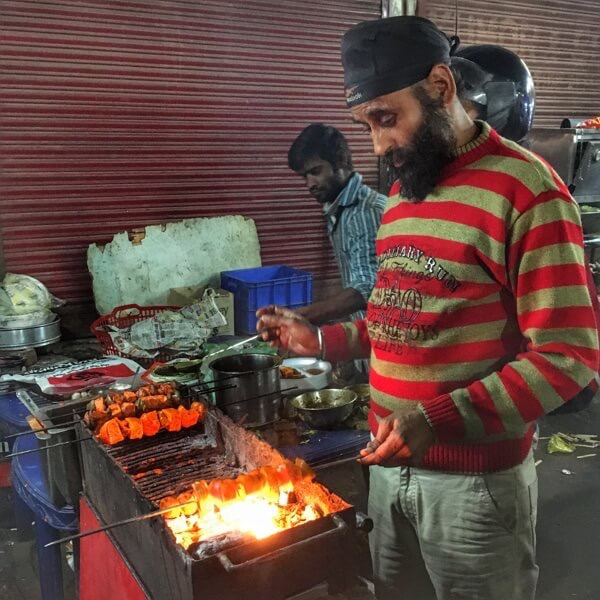 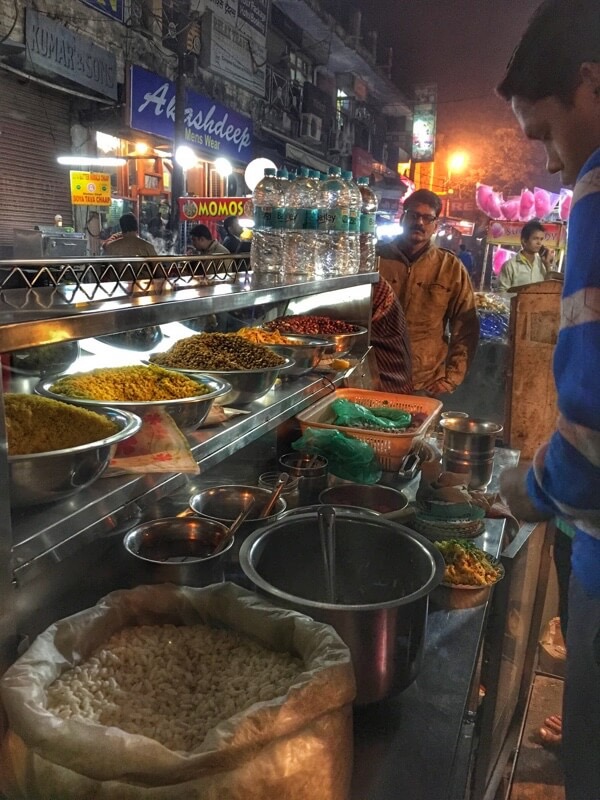 Q: Did you get mango lassi everywhere?

A: It wasn’t mango season, but I did get to try lassi, both freshly made and from a box. The fresh lassi was stellar! Served in a disposable clay cup, it included a piece of cooked yogurt on top, tasted mildly tart, and offered a slightly thicker texture than milk. 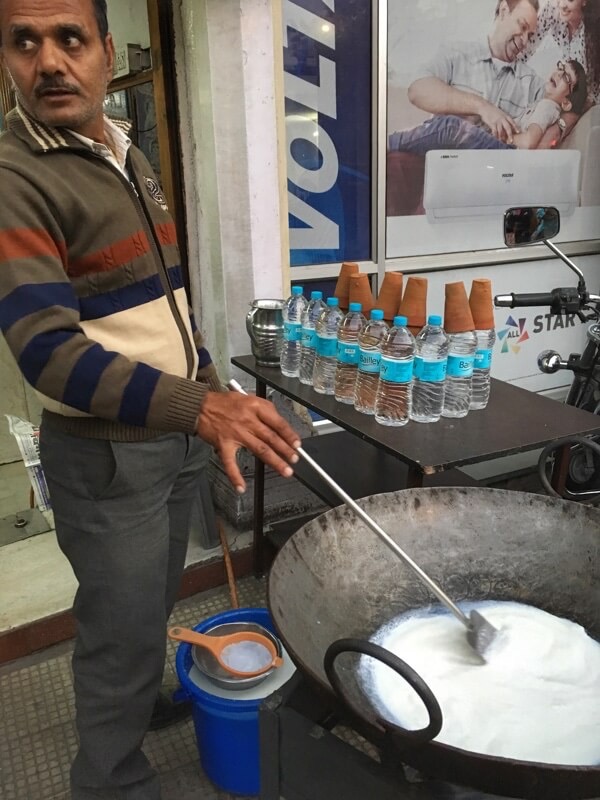 Too bad the boxed lassi didn’t live up to the fresh version: it was disgustingly sweet and had a watery texture.

Additionally, I sampled badam kheer (almond-flavored milk) and neer mor (spiced buttermilk). The winter version of badam kheer is kept warm in a large pot and is also served in a clay cup like fresh lassi. 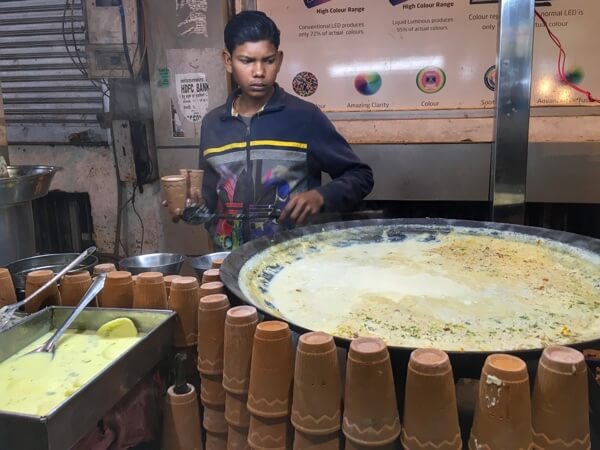 Pancham was convinced I wouldn’t enjoy the neer mor, but I slurped it down like a local. I can see why it’s used as a nutritious yet hydrating substitute for water. Perhaps a freshly prepared version would have stronger spice flavors, too. 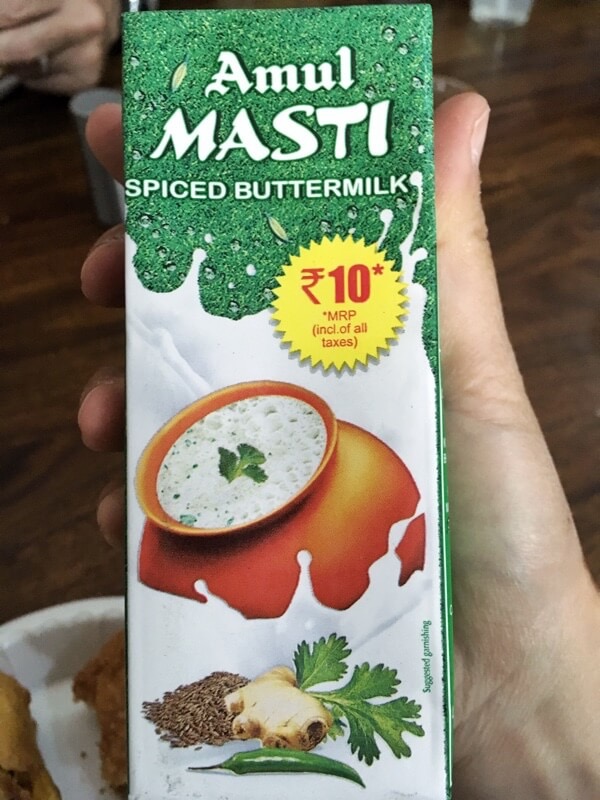 Q: Was there anything you got to eat that you haven’t seen served in American Indian restaurants?

A: I personally haven’t been to an Indian restaurant in the States that served goat, but we had lal maans (mutton curry) several times during our trip. Some restaurants prepared it better than others: the first version I had was too bony, but subsequent attempts were much improved.

The most exotic meal we had included bottle gourd curry, lily root curry, and desert beans. The chef said bottle gourd doesn’t taste very good but is great for your health. Despite his warning, I enjoyed it and even asked for more: it tasted a bit like a denser version of loofah. The lily root had a denser texture than potatoes, and the desert beans reminded me of mushrooms. We had some fascinating foraged foods: asafoetida is made from a gum produced in the mountains of Afghanistan, and desert beans are pulled off of rocks in dry season. 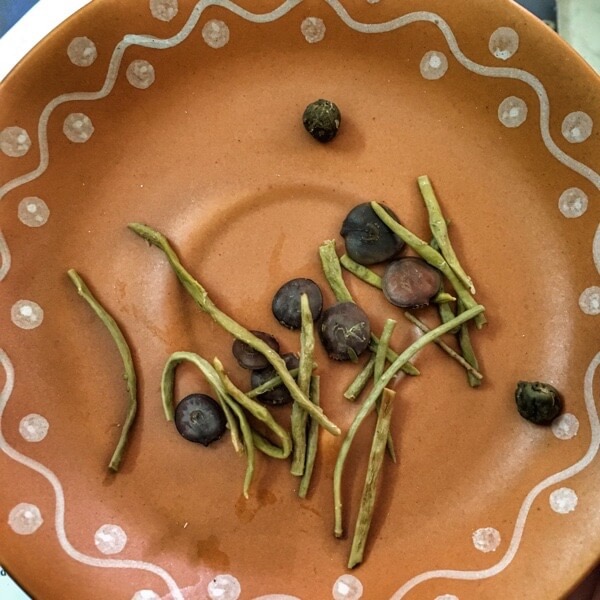 Another surprise: when I got some samosas from a small shop on the corner, their paper plates had math questions on them. No wonder everyone in India is so smart! 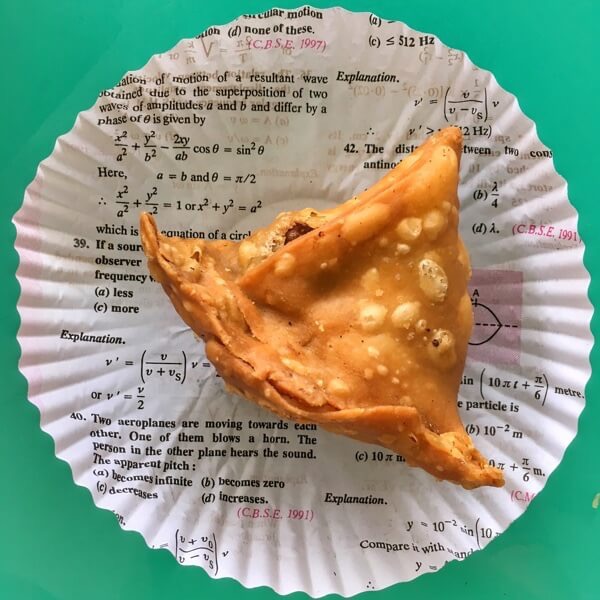 My absolute favorite dessert was when we got kulfi (homemade ice cream) from one of the vendors on the beach in Mumbai. He sold a wide variety of flavors, including the exotic chickoo (zapota) and sitalfi (custard apple) for ₹40 each. The ice cream bases are poured into cylindrical containers, pushed out like a Push-Pop, then sliced and cut into bite-sized pieces to order. 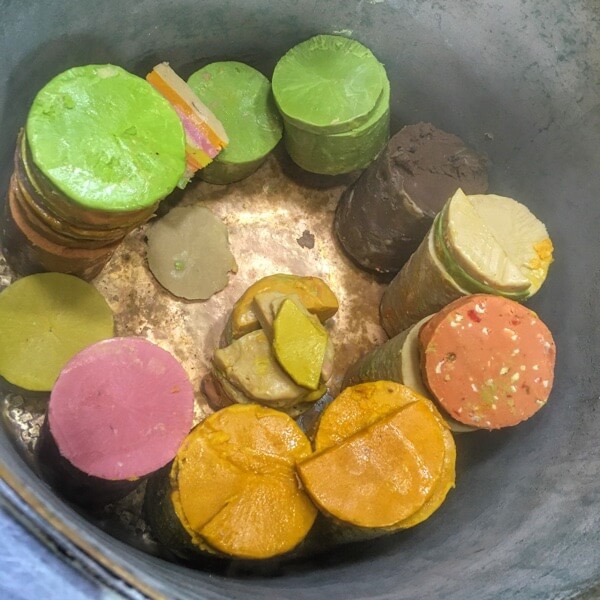 Q: How did the naan compare?

A: It was amazing everywhere, and I loved the variety of fillings you could get. (FYI, naan is leavened bread made with all-purpose flour, usually cooked in a tandoor oven.) Yes, plain, garlic, and onion options are readily available, but the cheese chili naan I tried on my last night in Goa was mind-blowing. When I ordered it, I wondered what kind of meat soup was going to go on the naan, but it turned out to be sliced green chilies: even better! 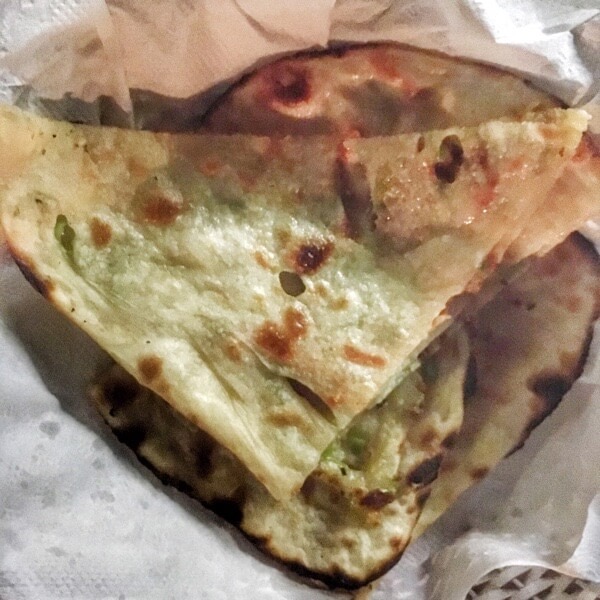 The more frequently eaten breads during my stay were roti/chapati, which is unleavened whole wheat bread cooked dry (i.e., without oil).

Q: How easy was it to communicate with the locals?

A: My contact with locals was fairly limited to those working at hotels and restaurants on the tour, but even the kids spoke English well and in one instance invited us to play a game of pittu (seven stones) with them on the street. You do have to be aware of how most people will ask for money if you take their photo, including the kids. 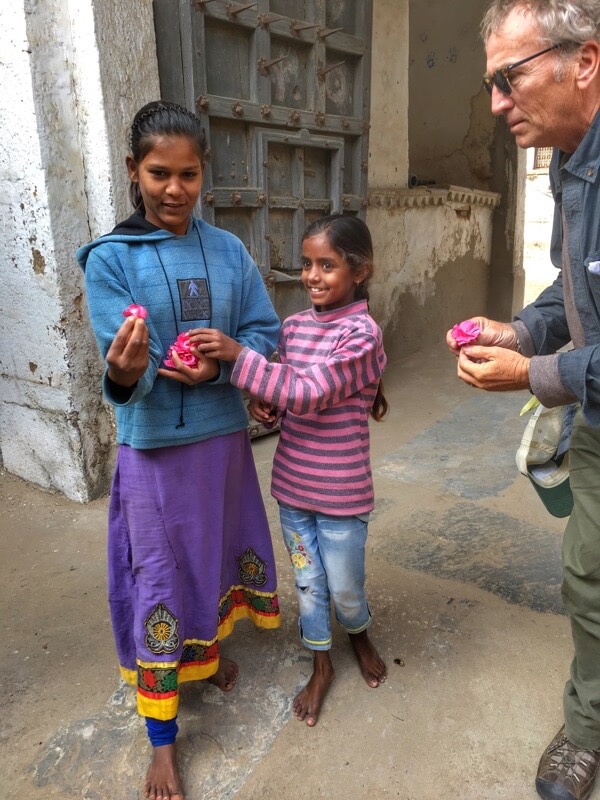 I would strongly recommend that you not give money to beggars as it cultivates an undesirable dynamic between locals and tourists. Instead, chat with them and build a relationship for cultural exchange.

Q: Anything else that was surprising?

A: India is the only country I’ve been to that has not only the normal hour change from other time zones, but it is also 30 minutes off. Originally when I updated my wristwatch to match Indian Standard Time, I thought my watch battery was causing a 30-minute delay. 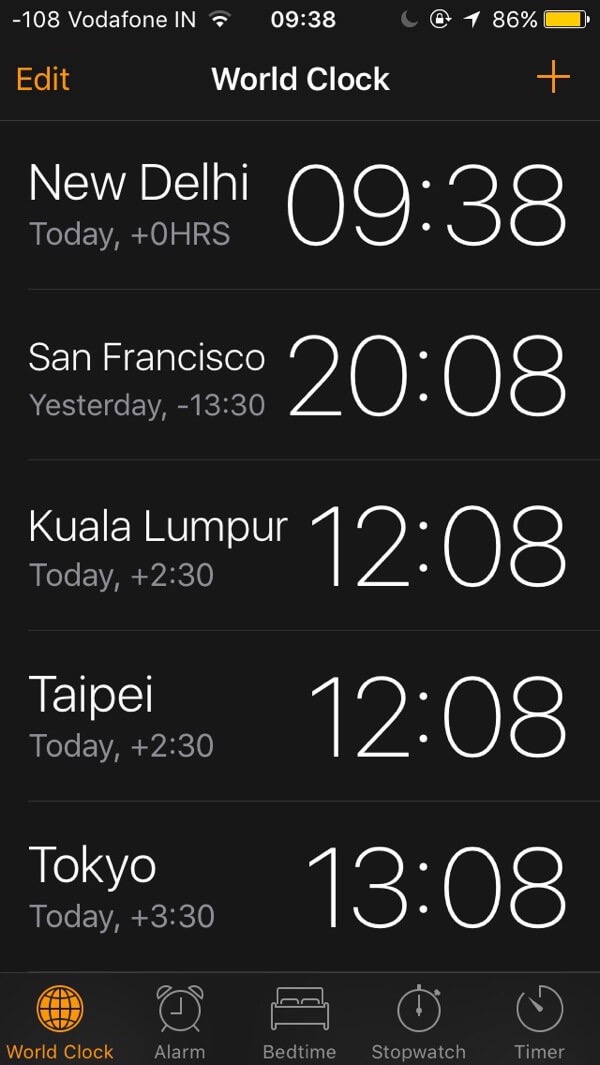 I had a great time with my tour group: there were ten of us, plus Pancham, who guided us expertly through both North and South India. Five of us were from the USA, four were from Australia, and one was from Switzerland. I miss them all and hope to see them again somewhere! 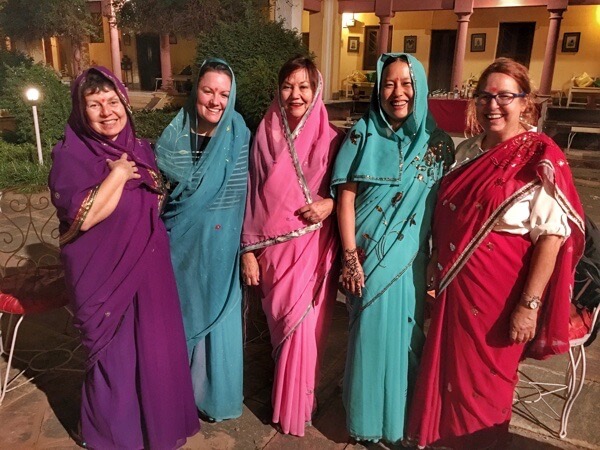